For the end result of this post, see my AUR package of Heroes.

The other day, something reminded me of a game I used to really enjoy playing back in my early days of getting to know Linux. That game was Heroes. It’s a clone of Snake/Tron/Nibbles but with some fun additions, a nice graphical style, and some funky visual effects. So, of course, I immediately decided to install it.

No results. Nothing in the AUR either. There is only one other course of action: I’m going to create an AUR package for it!

It looks like the last change to the game was 16 years ago so it could be fun getting it to compile with a modern toolchain.

Getting Heroes to compile in 2018

I put together a basic PKGBUILD that pulls down the source and data files from the Heroes sourceforge page and then runs:

Here’s the first of what I’m sure are many failure messages:

Some forewarning: it’s been quite some time since I wrote anything serious in C and I was never an expert in it anyway. But I think I know enough to fix this and so just commented out the static declaration as, after poking around in the code a bit, it doesn’t seem like it’s necessary anyway.

Now the compilation succeeds but I get the following error during linking:

Turns out that for some reason, the developers forgot to include the math(s) library. I’m guessing that perhaps it used to be linked by default in a previous version of GCC.

Now it at least compiles correctly! Next up, compiling the data, music, and sound effects packages.

Amazingly, those all worked correctly and I was able to play the game!

However, this game was written a while ago and originally targeted MS-DOS so it has a window size of 320x200 which looks rather ridiculous on my 1920x1080 desktop ;) 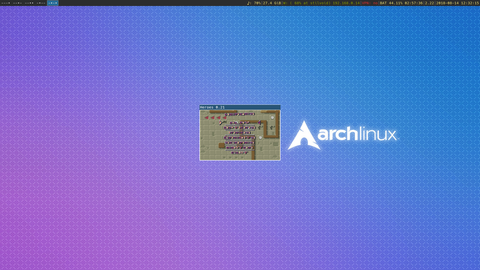 Fortunately, it looks like this is relatively easy. I just modified a few variables and changed a command line flag from -F | --full-screen to -W | --windowed.

Next up, rather than rely on SDL’s built-in scaling (it looks blurry and weird), I need to enable Heroes’ quadruple flag -4 by default. In fact, I removed all the scaling options and just left it to default to scaling 4-fold as that leaves the game with a resolution of 1280x800 which seems a reasonable default these days. I’m sure I’ll receive bug reports if it’s not ;)

The very last thing I’ve done is to enable the high quality mixer by default and remove the command line option from the game. CPU is a little more abundant now than it was in 2002 ;)

Things have changed since I last submitted a package to the AUR so here’s a brief writeup - if only to remind myself in future ;)

First step was to update the SSH key in my AUR account as it contained a key from my old machine.

Next up, I added a remote to my repository:

The next step is to generate AUR’s .SRCINFO file and rebase it into every commit (AUR requires this).

And then push it to the AUR repository:

I use packer to make using AUR easier (I’m lazy).

All in all, this wasn’t anywhere near as painful as I’d expected. Time to play some Heroes :D